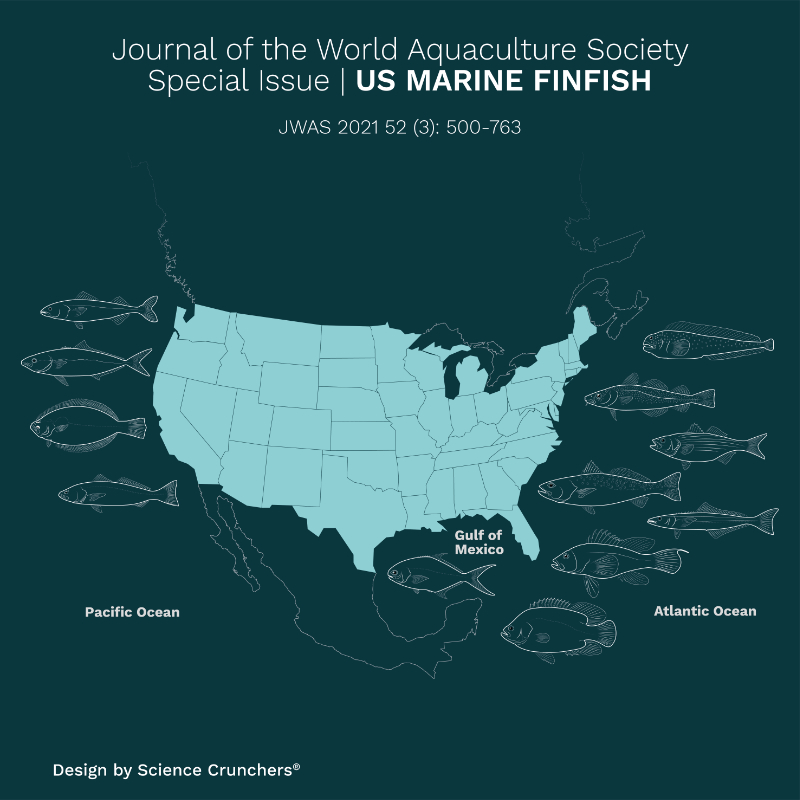 The special issue: Status of marine finfish species for domestic aquaculture application - guest edited by Martin Riche and Megan Davis - provides by far the most comprehensive and up-to-date review of the featured thirteen species’ development towards production in US marine aquaculture.  Papers highlight decades of laboratory research into closing lifecycles, larval rearing and feeding through to growout requirements. Authors identify future research needs to achieve commercialization of the species covered. Bottlenecks are identified and discussed and the potential of each species is estimated by the leading authors involved.

Generously sponsored by the United States Department of Agriculture (USDA) Agricultural Research Services and the National Oceanic and Atmospheric Administration (NOAA) National Marine Fisheries Service, this open access special issue is available for all to enjoy and reference.

The status of spotted seatrout (Cynoscion nebulosus) as a technologically feasible species for U.S. marine aquaculture.

Blaylock et al. summarize the nearly 50 years of research into lifecycle closure, culture systems and proposed commercial production of spotted seatrout in their review of this technologically feasible species for US marine aquaculture. The review covers not only early advances in broodstock husbandry, spawning and extensive larval rearing development during the 1970s but also details studies applying intensive closed system rearing. These have successfully reduced cannibalism and brought ongrowing of 500 g fish forward to within one year total production time. Pond production remains economically unfeasible due to the inability to control cannibalism and other management problems. The authors highlight the need to address economic questions, to drive diet optimization and to transfer technologies for improved production and before commercial production can begin.

Olive flounder or Japanese flounder is a candidate species for aquaculture in the United States, but is also produced at large scales in Asia especially in Korea and the Peoples Republic of China. Its extremely high value as a food species has already driven its international commercialization, as has its comparatively simple production during grow out. In their study of Stieglitz et al. look into the economic practicalities of production in the United States particularly in salt water recirculating aquaculture systems (RAS) and discuss the efficiency not only of olive flounder production but also of marine RAS in the US. They identify positives for olive flounder production in aquaculture as flatfish wild catch landings have reduced. The authors identify olive flounder as a prime candidate for land-based marine finish production in the United States in terms of economic potential, and environmental and social acceptability. The need for cost-effective production facilities is linked to availability of under-utilized waterfront properties and facilities and the existing ability of US suppliers to provide seedstock and information on production is highlighted.

The status of Florida pompano, Trachinotus carolinus, as a commercially ready species for U.S. marine aquaculture.

Aquaculture of Florida pompano has developed over two distinct periods since the 1950s in the United States. Initial attempts in the 1950s-80s were made using a variety of holding facilities including ponds, coastal enclosures, tanks and even floating cages to on-grow wild caught juveniles. Hormone induced spawning was introduced in the 1970s and larval culture initiated. However, most efforts failed to achieve growth of any merits beyond 200 g due to numerous nutritional and production system limitations. In the 2000s there was a resurgence of interest in pompano aquaculture whereby larval reproduction and lab rearing were successfully refined to allow mass production of juveniles at a variety of different laboratories. With the simplification of juvenile production, new challenges have arisen related to rearing and grow out, although production of circa 500 g fish within 12 months is now possible. Future research should focus on refinements which improve overall economic feasibility. These include broodstock development through selective breeding, optimization of feed production and provision to ensure optimal grow out, along with health optimization, improved marketing and well-grounded economic studies to support accelerated commercialization.