The impact of aquaculture field school on the shrimp and milkfish yield and income of farmers in Demak, Central Java 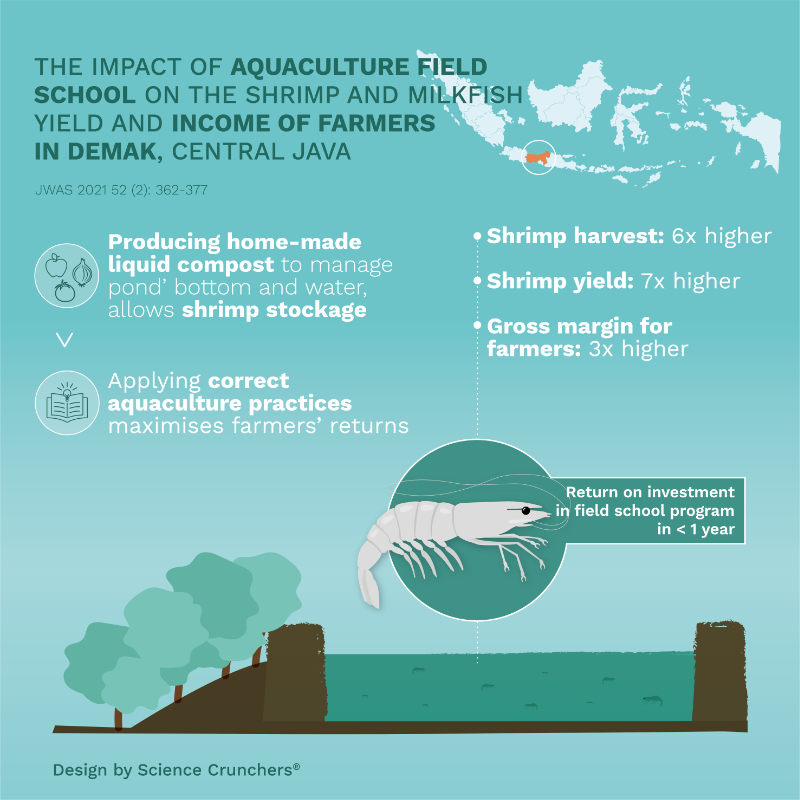 Successful training of traditional farmers to adopt new methods can have rapid and upscalable benefits in many aquaculture contexts. Widowati et al. followed the production performance of a group of 125 traditional milkfish and shrimp farmers in Indonesia following a 16-day aquaculture field training school teaching Low External Input Sustainable Aquaculture (LEISA), during one cropping season. They determined increase in yield of milkfish and shrimp and calculated economic benefits of the training. Adopters of the LEISA practices exhibited a threefold increase in shrimp yield and an increase of nearly US$1,000 per hectare per annum in economic yield. The payback time on investment for the $1,060 course was less than a year and overall rate of return for adopters surveyed was around 1.8. Results clearly indicate the benefits of low cost training in vastly increasing economic yield to this group of farmers who represent nearly 80% of the production area in Indonesia. By quantifying these benefits the authors clearly show an economic value in training and indicate how overall agriculture productivity can be increased at a national scale through simple and upscalable environmentally beneficial vocational training activities.

Kamiyama et al. investigated Japanese marine aquaculture, in particular oyster farming within the Miyagi Prefecture in Japan, through the development of a bioeconomic model. Bioeconomic models can be particularly useful in aiding management decisions especially during periods of high-impact change, such as temperature extremes and instability caused by climate change. The authors developed three scenarios in their model. These mirrored low, moderate and high prevailing temperatures. Models showed that oyster farm profitability could be increased by early harvesting starting in late October or early November. High temperatures reduced the profit of farming when compared to current conditions indicating a likely economic impact of climate change-induced temperature increases. Overall, the final economic model and scenarios provide a baseline for successful management of the industry to support new investment and development to adapt towards changing economic and climate realities.

Acceptance of insect meal in aquaculture feeding: A stakeholder analysis for the Italian supply chains of trout and seabass.

The use of meal from a variety of candidate insect species as a replacement for fishmeal in aquaculture diets has been proposed and promoted for many years. The authors of the current study investigated potential users’ acceptance of insect meal in diets for two European aquaculture species of high interest. The results indicated that a direct economic assessment primarily related to the cost of feed and its effect on growing animals is complemented by a different set of considerations, which relate to needs of specific farm and business models. Results show that farmers, feed producers and insect producers must consider final product destinations, large retailers’ requirements, processing practicalities, digestibility and solid waste production. These are important in addition to the more obvious aspects such as feed price, feed conversion ratio and feed performance variability. Barriers to insect meal acceptance are, on the one hand, predictable and very much related to industrywide parameters of diet quality. On the other hand, customer-specific requirements play an important role and must be addressed individually in order to assure market penetration.

Compensating the negative effects of high levels of fishmeal replacement in shrimp diets promises to improve the environmental and economic performance of shrimp farming worldwide. In their recent study, Kesselring et al. were able to improve the growth performance of Litopenaeus vannamei fed a diet with only 5% fishmeal by the supplementation of a phytogenic feed additive made of extracts from aromatic plants. The inclusion of 0.4% of the photogenic product improved shrimp growth and immune response when compared to those fed a control diet. Supplementation improved overall growth performance to the level of animals fed formulated diet with 24% fishmeal over the same two months. Integrating such additives in formulated shrimp diets will allow future inclusion of alternative proteins at higher levels resulting in economically and ecologically more viable shrimp diets for global aquaculture.